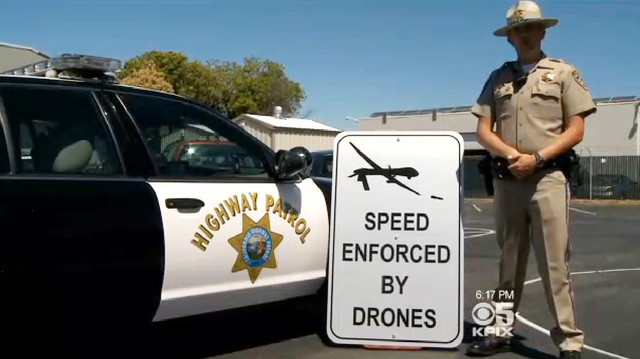 Surveillance, eavesdropping, metadata mining, and drones are all very much in the news these days. The recent revelations by Edward Snowdon show just how far and deep all of this activity has actually penetrated our society. The NSA seems to have unlimited power to snoop on Americans and the world and the CIA has the formidable power to not just surveil, but to attack targets of their surveillance with drones. These new forms of surveillance and warfare are a threat to the world, and are increasingly being used by every country that can afford them. Drones will soon be in wide use in the United States and we need to be very careful about how we allow our government to use this technology.

The US has, and soon many other countries will also have the ability to project awesome force with these Predators and Reapers. The pilots, sitting in front of computers in Florida or Nevada, can watch someone walking in a village in Afghanistan and with the flick of a joystick fire a Hellfire missile and kill him. Is this really what we want our government doing on our behalf? We must ask: who is watching from these floating robots in the sky? Who is watching the watchers?

For several years I have been investigating surveillance and the imposition of power in my art. I was really interested in finding a way to speak about surveillance and the surveillance state that seems to be creeping upon us. I started with a series of drawings of guard towers, border towers and watchtowers. The image of the tower is fraught with psychological implications for most people. The phallic nature of the form is rather obvious and they can have a very sinister feeling and evoke a sense of foreboding. They are to me a symbol of the patriarchy, and a symbol of the means that the state and the patriarchy will go to project power. That being said there is also a beauty to the form that I find compelling.

I turned to images of drones after realizing that they are the new watchtowers of the state. They are also oddly sinister and, like the towers with their unseen observers, you cannot see who is piloting them. The windowless, bulbous noses of the Predator drones and the Reaper drones also have a shape that is, like the towers, phallic, and to my mind, rather scary. My drawings of the towers and drones, with their pastel or charcoal finger and handprints, have a humanizing effect on these sinister objects. They have the feeling of lost artifacts or blueprints for an uncertain future.

The idea of the Speed Enforced by Drones signs came to me after seeing the Speed Enforced By Aircraft signs on the highways in California.  What if I simply changed the signs to be Speed Enforced by Drones instead? Could these signs be a warning sign of things to come?  If I put them on the highways could that help raise peoples awareness of where we are headed with the surveillance state? Plus honestly, I thought it would be funny. I love the idea that a prank can be funny and still get across a serious message.

I designed the signs to look like the existing signs put up by Caltrans, the government entity that operates the highways in California. I changed the airplane to a drone that I designed from a photograph, and added a Hellfire missile for greater effect. I had a meeting with a local sign company where I showed them my layout. They immediately started calling me The Drone Dude. I had them do the vinyl cutout for me and I cut the aluminum and attached the reflective vinyl in my studio.  After doing some research to figure out how to mount them on existing poles I gathered all the parts and equipment I would need to do my intervention.

When I told friends of my plan, they all assumed I would go out under the cover of darkness to do my deed, but I thought it would be better to hide in plain sight. After all, I had the perfect white pick up truck that looks like a Caltrans vehicle.

Armed with reflective vests,  hard hats and traffic cones I set off with my friend Lewis deSoto in my white pickup truck one Monday morning in July.  We suited up, and a bit nervously I installed the first sign on Highway 12 near the di Rosa museum in Napa while my co-conspirator took photographs. Removing the protective paper from the sign, I looked down the road to see a California Highway Patrol car approach! I thought we had been caught, but it seems my ruse worked and he just drove past without seeming to notice the newest sign on the highways of California!

After the first sign went so well we continued on to Highway 37 in Sonoma County where we put up two more signs. No one said anything to us as we continued our work. It was actually turning out to be fun! Although I had done some scouting of locations, we really just found spots that had a nice wide shoulder to pull off on and an empty area on a pole that would be right for the signs. We found a good location near Sausalito on highway 101. With all the traffic headed towards San Francisco on that freeway it had the potential of getting the greatest number of viewers, as well as being the most vulnerable for being caught. We then headed back north on 101 and found another good spot for the commuters crawling home in the evening to see the sign.

At first there was no reaction that I knew about. Some of the signs had been removed very quickly and I was afraid that my intervention would get little notice. I had a text from a friend on Thursday morning that said: “Just saw police on 37 confronting unauthorized signage”! I couldn’t believe that they had lasted so long! Unbeknownst to me the local San Francisco CBS affiliate KPIX 5 ran a story about the mysterious new signs on the North Bay highways that evening.

The next day my wife came running into my studio with the phone in her hand and said that CBS news wanted to talk to me! They wanted to know if I was the artist who put them up, and my first reaction was: uh oh, now what have I gotten myself into! I decided since I had already published the images on my website stephenwhisler.net and Facebook that I may as well own up to my deed. The producer, Wilson Walker, drove up to Napa, interviewed me in my studio and spent a couple hours on my patio editing his piece. They ran the interview that evening and published it along with an article on their website.

The web posting went viral and I started getting calls from other journalists. NBC Digital and the Huffington Post ran articles as well as many local bay area newspapers. Eventually my local newspaper, the Napa Valley Register, came and interviewed me and published an article as well. The CBS story was also republished in conspiracy sites like InfoWars.com and the story went as far as Paris Match and obscure blogs in Germany and Norway. It seems I had hit a nerve! If you Google “speed enforced by drones” you can see the many different websites that picked it up.

It was interesting to me that the commenters on conspiracy sites had interpretations like “these drones are real, I’ve seen them flying over my house” or that the signs were really put up by the State of California and they realized that they had to take them down because of the bad reaction they were getting! Everyone who saw the signs seemed to put their own interpretation on them. In the various online forums it was discussed in I was called everything from “brilliant” to a “Cali lib idiot”.

I think perhaps hundreds of people saw the signs on the highways but many thousands more were able to see them on the web. I hope I was able to bring the idea out that these drones are coming to the US and that we better start thinking about what this and other surveillance will mean to our future.

The California Highway Patrol finally contacted me about a month later. The investigating officer, who couldn’t have been nicer, came armed with photos from my website and other evidence. I immediately owned up to my crime; what else could I do after having admitted to it on the evening news? She informed me that if my signs had caused an accident the charges would have risen to a felony, but since that didn’t happen it would probably just be a misdemeanor and a fine. I recorded the official interview on my phone, and after it was completed Officer Alvarado motioned for me to stop the recording. She looked at me and said: “I loved the signs; everyone at the CHP loved the signs!” I then gave her a tour of my studio, showed her the last remaining sign and the other work and drawings before she left. She informed me that she would be passing everything on to the District Attorney who would make the decision to file charges.

Finally, on November 2, 2013 I received a letter from the CHP informing me that they had property of mine, four Speed Enforced By Drones signs, and that I could come by and pick them up! I suspect they thought that prosecuting me would simply add to the publicity I was getting and would make the CHP look bad, but I am unsure why they didn’t prosecute. When I arrived to pick them up I met with Officer Barbour.  She allowed me to take a couple of photos of her handing the signs over to me and asked me if I would be willing to donate one of the signs to the California Highway Patrol for them to hang in a hallway where they display memorabilia. I was very happy to give it to them, since I thought they had been so reasonable and that all the CHP officers I had been in touch with really got the message of the signs and enjoyed my humor.

Many municipalities and police forces are investigating getting drones for their own use, and I suspect the CHP is thinking about it as well. The public needs to think long and hard about how far we will let the people and organizations that are supposed to protect us surveil us and snoop on us from our own sky.