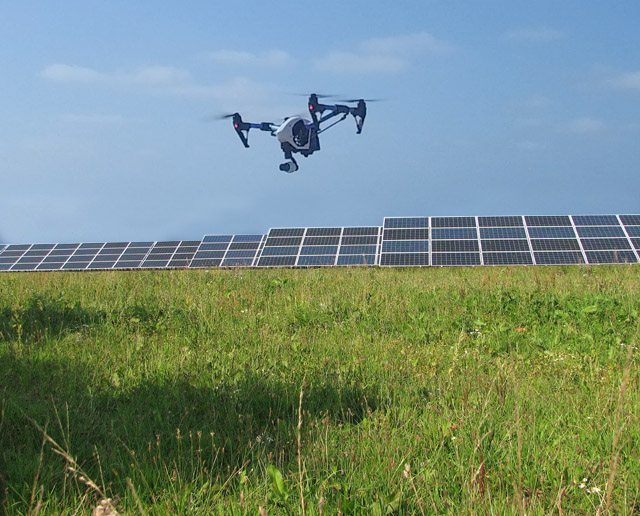 The applications for aerial drone photography in the Solar Industry are many and growing! From site scouting to installation from panel cleaning and wild life endangerment to inspections, drones have found a home in the solar industry that does not seem to be going anywhere. New uses for how to use drones as labor-saving devices in this industry are being conceived and invented left and right. The most common uses to date seem to be site scouting, documenting and tracking project status, followed by the needed inspections.

Most solar companies today have come to depend on surveys, county maps and Internet images to get the information they need. With drones or unmanned aerial vehicles (UAVs) capturing aerial video this can all be handled with one simple and time-saving device!

Prior to the implementation of aerial drone photography the only options for solar companies to get a picture of their final installation was to climb up on the roof and try to get the best shot or hire a helicopter to get an aerial shot. The first poses risk to human life as well as insufficient in capturing the entire final project in a single shot, the second is just down right expensive! Capturing aerial photographs via drones is quick and relatively inexpensive.

When it comes to surveys and inspections Nic Stover, CEO of CalCom Solar has some thoughts. ‘Theoretically, we could eliminate the need for a survey.’ For example, he says, if there are 3,800 modules on a 1 MW site, individually inspecting each panel ‘would be a very, very time-consuming process, even if you had a hand-held sensor.’

His hope is that the UAV would, instead, get the job done much more quickly. During an inspection process, the aircraft would fly down each row of panels and search for any thermal hot-spots or electrical issues – essentially, anything that needs to be checked but that cannot be seen by the naked eye, he says.

Time-saving translates to money-saving which is music to anyone’s ears. But this is not the only reason that drones are being deployed over homes and solar panel fields. Safety is another very important factor. Why not inspect the rooftop panels via drone and save the risk of human injury?

How To Choose An Aerial View Drone Photography Company

It seems at this point that all solar companies would be working with aerial view drones, so why aren’t they? Well, in order to use UAVs for drone photography there is quite a bit of behind the scenes legality and paperwork that must be put into place. This can be both, time consuming and expensive. For the very large solar companies, with very large pockets this may be a possibility. For small to mid-sized solar companies however, it may be more prudent to contract with a professional drone company.

When looking for a drone company to partner with, make sure to ask for their credentials before signing that contract. In order to keep your assets safe, you want to make sure your working with one who has already completed the necessary steps to become FAA Exempt, licensed, insured & registered. And one more thing, experience is paramount, many people are trying to jump on the drone photography bandwagon; you don’t want to work with someone who has no background in the aviation and model aircraft industry. Just as you would work with an expert in any other area of your business, the same applies here.